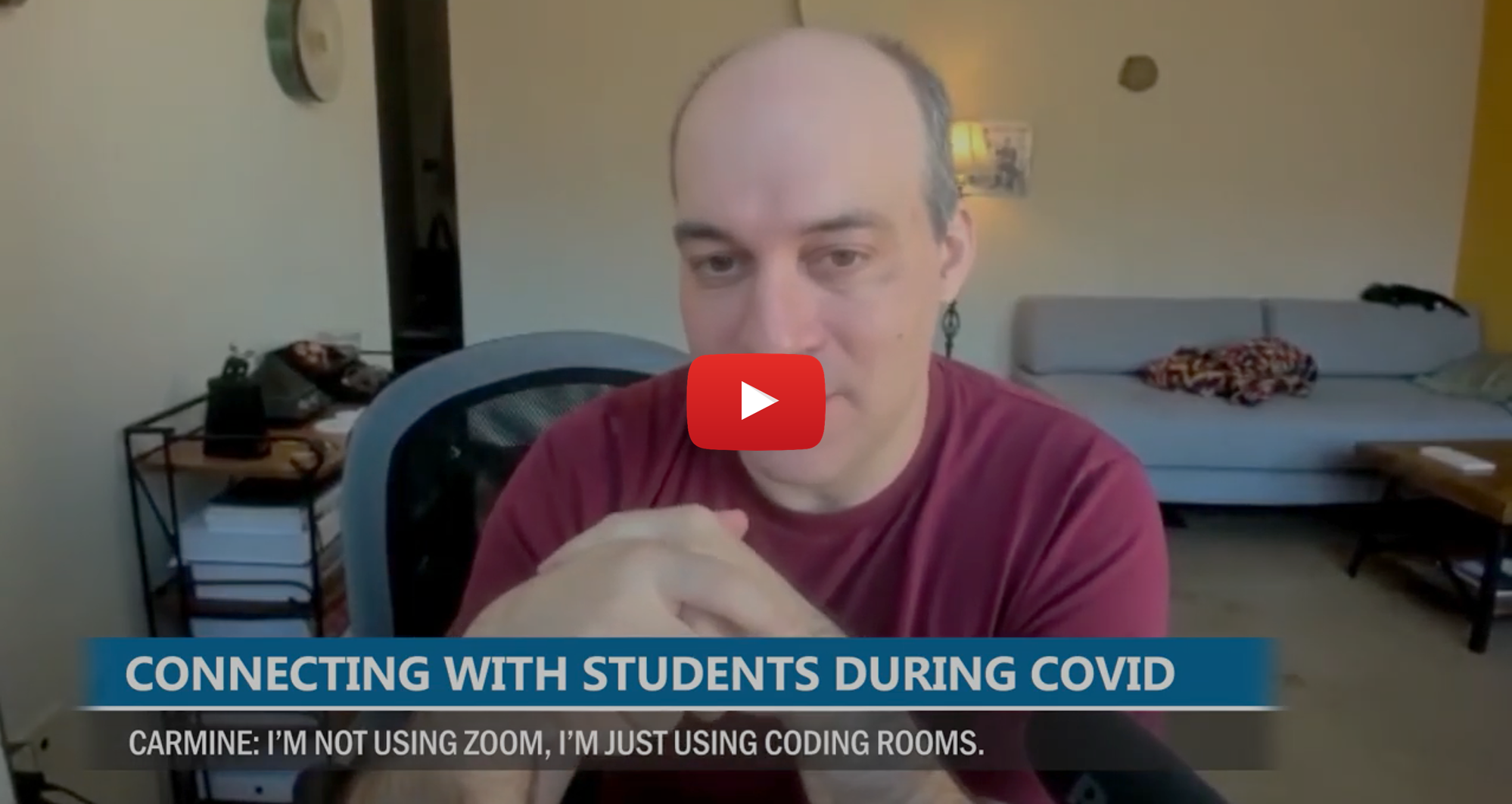 How can a computer science professor conduct labs with his students during COVID-19?

Carmine Guida is an adjunct professor of Computer Science at Pace University in New York City.

His talent in programming was evident from a young age as he had been coding since when he was just 10 years old, upon owning his first computer. Although he later established a worldly professional career as a Middle Eastern hand-drum (Doumbek) musician, teaching remained at the forefront of everything he did. From hosting hand-drum workshops around the world to teaching coding lessons at universities (such as Pace and NYU), his passion for education and teaching is evident.

For his computer science classes, Carmine typically walks around with his TA during the lab portion to provide support and guidance to his students. This was not going to be possible this year as New York was one of the hardest hit states in the spring of 2020 by the COVID-19 pandemic. It effectively cancelled all in-person teaching. How was he going to effectively run his labs now with students that were just introduced to coding and needed more in-person assistance?

In May 2020, Carmine stumbled upon Coding Rooms while on a Reddit thread and was immediately interested in the product for aiding his introductory coding class at Pace the coming fall.

Although the product was still in early-stage development, the concept was built. Carmine clicked the link and started using it as the interface was intuitive and easy to use. He continued using our platform and even reached out with suggestions on improving our IDE with multi-file support to enable object-oriented programming. A new semester at Pace University began in fall 2020 and Carmine has to teach remotely due to the pandemic. Because of New York’s long journey in recovering, most courses are being held online and Carmine had to pivot to fully remote teaching and piloted Coding Rooms with his first-year Computer Science class.

For Carmine, the most important feature is how he can see his students typing in real-time.

Computer Science, unlike other classes, really requires the student to be engaged when answering in-class programming exercises. Pre-COVID, Carmine says his classes had a TA to walk around and help students “over-the-shoulder” during labs. This increased student engagement in the class as instructors could see their students doing the exercises as they walked around and provided feedback. Given social distancing requirements, working alongside students was rendered impossible. Therefore, Coding Rooms tracks student activity keystrokes specifically for solving the engagement and participation challenges that come with remote learning. As it “simulates being in a lab,” Coding Rooms allows Carmine to effectively “manage the classroom individually” as he now tracks how active his students are when he is teaching.

Our real-time IDE allows the instructors to see the last time a student was actively typing into the platform.

A story that Carmine has shared was how he once saw one of his student’s last activity was over 33 minutes ago during one of his lab sessions and had not participated during in-class exercises. He then reached out to him in an email afterward to see if anything had prevented his participation.

Therefore, Coding Rooms holds the students accountable for actively engaging in classroom activities. Moreover, even if in-person/hybrid teaching were to resume, social distancing must still be enforced and Coding Rooms can help solve the issue of insightful classroom management - by still being able to see students' code while keeping a distance of 6 ft.

All the features and support you need to run your programming classes like a pro. Choose Coding Rooms today.